That was a very persuasive interpretation: firm structure, and beautifully solid in expressing the essence of the story, virtuosity and agitation (...). We felt like Chopin himself was present in the concert hall that night with Niemczuk...dreaming, wandering in his nostalgia. Chopin Magazine, Tokyo, August 2017
I have come to know his great talent and to enjoy the spirit of music which truly comes to life in his most poetic playing and impressive artistic personality. Arie Vardi - Israel.
Mr. Niemczuk’s playing was notable for its fluidity, extremely wide dynamic range — from resounding fortissimos to whisper-soft pianissimos, variety of tone colors, and dazzling virtuosity.
The Epoch Times, New York, 2013 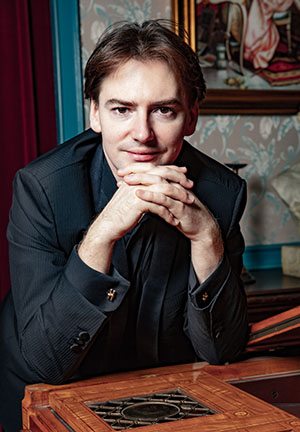 Grzegorz (Greg) Niemczuk is regarded as one the most interesting and outstanding Polish artist of his generation and the only one in Poland who have all Chopin's piano music in the repertoire. In 2017 his interpretations of Chopin's music were placed by the National Polish Radio next to Martha Argerich, Maurizio Pollini and Adam Harasiewicz. Born in 1985, he continues the tradition of Ignacy Jan Paderewski and Artur Rubinstein – the two greatest Polish pianists of all times, who had also been touring all the world. During the last 15 years of his career he has performed over 400 recitals and concerts in 35 different countries on all 6 continents, reaching more than 100.000 people all together. Admired for his sensitivity, poetry, beautiful sound and passionate virtuosity he became a favorite with audiences and critics alike particularly in Norway, Japan, China and Latin America. He has appeared in such concert halls as: Carnegie Hall in New York, Kioi Hall and Tokyo Bunka Kaikan Hall in Tokyo, Sapporo Education and Culture Hall, Hakodate Performing Arts Center, Beijing Concert Hall, Quintai Concert Hall in Wuhan, Guotai Arts Center in Chongquing, Victoria Concert Hall in Singapore, Teatro Sucre in Cuenca, Teatro Centro del Arte in Guayaquil, Centro Cultural in Lima, Peru, Tsarskoye Selo in Russia, Teatro Puccini in Milano, Teatro Civico in Vercelli, Busan Cultural Center in Busan, Teatro Sergio Cardoso, Centro Cultural in São Paulo, Yamaha Artist Services in Paris, Conservatoire Musique, Danse & Theatre in Orleans, Warsaw Philharmonic Hall, Palau de la Música Catalana in Barcelona and many others. His collaborations with orchestras have included appearances with Busan Philharmonic Orchestra, Cracow Philharmonic Orchestra, New York Concerti Sinfonietta, Tokyo Mozart Virtuoso Orchestra, Polish Philharmonic Sinfonia Baltica, The Silesian Philharmonics in Katowice, The Symphony Orchestra of Lower Silesia and many others.
In December 2017 he had a debut in China (Beijing Concert Hall) as a part of the Polish Circles of Art Festival (The biggest Polish Festival in China). This performance was such a success (with fantastic reviews in CCTV and other most important media in China) that since than he is performing in China every year becoming an important part of the Polish Circles of Art Festival. His solo debut performance in Tokyo in July 2017 was a spectacular success, described in the "Chopin Magazine" as the "performance with firm structure, and beautifully solid in expressing the essence of the story, virtuosity and agitation, transmitting the nuances of changing the light and shadow as well as the poetic tune of mind". He became a favorite of Japanese audience immediately, having been invited to another tours in August 2017, January, November 2018 and March, April 2019. His Carnegie Hall debut (with Chopin's 2nd Piano Concerto) was described by The Epoch Times as "full of fluidity, extremely wide dynamic range — from resounding fortissimos to whisper-soft pianissimos, variety of tone colors, and dazzling virtuosity". His future engagements include concert tours in Norway (Spring and Autumn 2022), Japan ( October 2022). Niemczuk's vast repertoire spans more than 250 solo pieces and 30 piano concerti ranging from the Baroque to the contemporary era. His particular specialty is the Romantic period and particurarly Fryderyk Chopin. Due to the pandemic in April 2020 he launched an unprecedented wordwide project to record videos-lectures on all the works of Fryderyk Chopin. All together more than 315 episodes were made in two languages (Polish and English) published on YouTube and on Grzegorz's Facebook fanpage.

Grzegorz Niemczuk is the prizewinner of many international piano competition, notably a winner of the 2013 International Carnegie Hall Concerto Debut Competition in New York City and the 40th National Frederic Chopin Piano Competition in Warsaw (2010). He has received many honorable awards in his home country including from Prime Minister and the Ministry of Culture. He has also performed on many music festivals including the Grieg in Bergen Festival (2017,2019), Polish Circles of Art in China Festival (2018, 2019), Busan MARU International Music Festival, South Korea (2016), International Keyboard Institute & Festival in New York (2008, 2009, 2011, 2014), Festival Dino Ciani in Cortina d'Ampezzo, Italy (2010,2012), Mosel Music Festival (2011), Leipziger Chopin–Tage(2014), „La Folle Journee de Varsovie" in Warsaw (2010) and many others. In addition to his performing career he is also a dedicated pedagogue and currently serves on the piano faculty of the Silesian University in Katowice, Poland. In October 2017 he earned his PhD in Academy of Music in Wrocław, Poland. His students are winners of international piano competitions in Poland, Italy, Slovakia, Croatia and France. He is also invited to present masterclasses and lectures in many music universities including the Norges Musikkhøgskole in Oslo, University of Agder in Kristiansand, Norway, Sapporo Conservatoire, Japan, Federal University of Santa Catarina in Florianópolis, Brazil, Federal University in Porto Alegre, Brazil, The Nanyang Academy of Art in Singapore, The Edna Manley College of Performing Arts in Kingston, Jamaica, The Conservatory of Music in Lima, Peru, Universidad Católica in Quito, Ecuador, Changde University in Changde, China.

The repertoire of Grzegorz Niemczuk consists of a few hundred pieces for solo piano as well as more than 20 concertos for piano with orchestra.

Music is a moral law.
It gives soul to the universe, wings to the mind,
flight to the imagination, and charm,
and gaiety to life and to everything.
Plato